We use "cookies" to make the most of your visit to our website. They can be used to personalize content and ads, to analyze traffic, and to display various third-party plugins (e.g. social sites, online chat). At the same time, we share information about your use of the site in an anonymized form with our partners in the field of social networks, advertising and web analytics. More information can be found here.

Marketing "Cookies" are used to monitor customer behavior on the site. Their goal is to provide relevant and useful advertising for each individual user, making them beneficial to all. (more)

Statistical "Cookies" help website owners to understand how users behave on their sites by collecting and reporting anonymous data. (more)

These "Cookies" are indispensable for the functionality of the website and ensure its functioning, for example, when navigating and making user sections available. This site cannot function properly if cookies are not enabled. (more)

These "cookies" primarily help to personalize the content, for example, by offering specific products according to the history of your web browsing or according to orders. (more)

We use "Cookies" to make the most of your visit to our website. They can be used to personalize content and ads, to analyze traffic, and to display various third-party plugins (e.g. social sites, online chat).

As you know, we started with the cups at the end of 2007. I am a big promoter and of course a user. I can't imagine a monthly cycle without this product anymore. I have also tried the menstrual panties and after a few uses, I have to admit that it is a nice addition to the cup when you want to be sure when exercising that everything is sealing as it should.


We still say that the menstrual cup doesn't restrict or limit us in any way. By that we mean traveling, normal activities, and most importantly, playing sports.

We are based in the Czech Republic and have another big company in Mexico. Since we just went there for work, we decided to make a Czech-Mex YUUKI team and take part in the official Ironman 70.3 race in Cozumel. https://www.ironman.com/im703-cozumel And since we are rather hobby athletes, we entered the relay category. If you have no idea what race this is, it's a triathlon. Where one of us swims 1.5 km in the sea, the other cycles 90 km and I run a ½ marathon, 21 km.

And why do I say that.... When I look at my menstrual calendar, I see that the race falls exactly on my days. Not that I'm crazy about it, but whatever.... There's a solution for every day. After all, I've been confirming for years that we are not limited with the cup. And because we don't want to be extra hard on ourselves during the race, we already started training earlier this year. Well, it will hurt for sure, but hopefully we will enjoy the local sport atmosphere and we won't have to think that we underestimated something in our preparation.

Sport-wise, we've decided as follows. David, because he lives in Mexico, will ride his bike. It's easier for us because we don't have to take the bike on the plane. Mira, because he is a natural swimmer, will go for a half hour swim in the sea and I will run. And as I wrote, the race works out just right for my days. Of course, I've had enough experience with the cup and the sport, but I've never had to deal with it for such a big race. In my training, I've found that the Classic (harder) cup is better for me, as it resists muscle movement more and thus seals better. So the choice in this case was clear. I think it will be fine for me. What I always have to deal with, unfortunately, are stomach and leg pains. Especially on the first days of my period, but I can't really control that. In this case, I'm hoping the race adrenaline will override this and I can enjoy the race to the fullest.

I'll tell you about how I did and how I enjoyed running with the YUUKI cup right after the event. 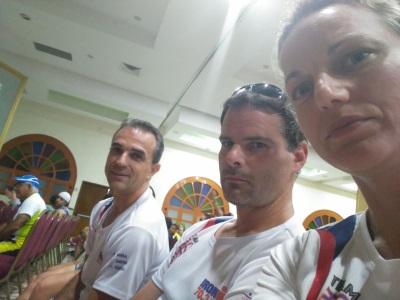