We use "cookies" to make the most of your visit to our website. They can be used to personalize content and ads, to analyze traffic, and to display various third-party plugins (e.g. social sites, online chat). At the same time, we share information about your use of the site in an anonymized form with our partners in the field of social networks, advertising and web analytics. More information can be found here.

Marketing "Cookies" are used to monitor customer behavior on the site. Their goal is to provide relevant and useful advertising for each individual user, making them beneficial to all. (more)

Statistical "Cookies" help website owners to understand how users behave on their sites by collecting and reporting anonymous data. (more)

These "Cookies" are indispensable for the functionality of the website and ensure its functioning, for example, when navigating and making user sections available. This site cannot function properly if cookies are not enabled. (more)

These "cookies" primarily help to personalize the content, for example, by offering specific products according to the history of your web browsing or according to orders. (more)

We use "Cookies" to make the most of your visit to our website. They can be used to personalize content and ads, to analyze traffic, and to display various third-party plugins (e.g. social sites, online chat).

It's two in the morning, a couple of hours after the race, and I'm sitting with my computer trying to write up how the whole race went.

To make a long story short: We did it. And in almost the same amount of time as we did in 2016, the first year we participated in this amazing race. That would be a short summary, but it's probably not what you'd expect.

Well, I'm sitting here at night, so that says something about being overtired and unable to sleep. Mira swam a great time and was out of the water amongst the first competitors in 27 mins. He swam in the sea along the coast 900 meters upstream and then back with the current. I was so jealous of his downstream direction. Míra doesn't talk much so when asked how his swim was, he just stated that it was awful and that everything hurt now. 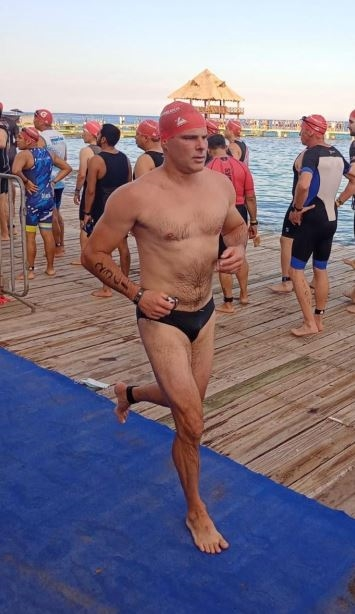 After handing over the chip, David immediately set off on his 90 km stretch. The route took him 60 km around the island and then another 30 km around the town. On the other side of the island it's very nice when you're not in a hurry and enjoying the tropical weather and nature. If you try to ride a bike, you have to be prepared for 100% headwinds. And no matter how hard you try, it will always suck you dry. David made this distance in 2:38 and didn't say one encouraging word to me as he handed me his chip. He said he wasn't able to speak for another 30 minutes. 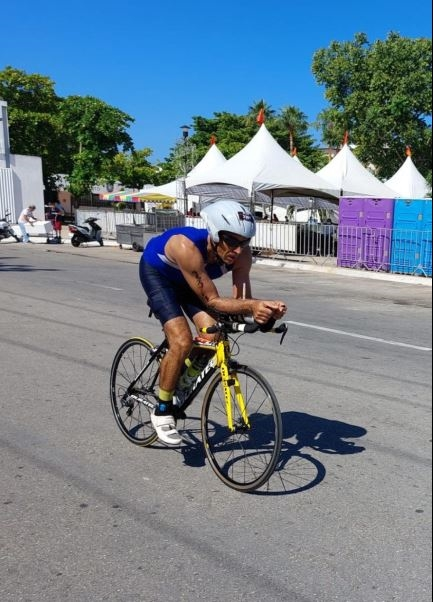 My secret dream was to do my leg in 2 hours. I know it's not a good time, but I have to be realistic and go with what I'm good for. Last time I did it in 2:11 and I was glad I crawled to the finish line. I hadn't counted on the crazy climate and heat at all. It was 33°C in the shade and 83% humidity. It's run on tarmac between hotels and there's no shade anywhere to cool off or hide from the blazing sun. Well, as I wrote earlier, the race worked out exactly on my days. Since I've had experience with the cup and sports activity over the years, I didn't want to leave anything to chance this time either and took my menstrual panties as a backup with the cup. Well, I have to say I did the right thing. Anyway, my legs and stomach were already aching before the start, the classic menstruation syndromes were present on this day when I was full of adrenaline and hoping I wouldn't feel this discomfort. Two laps were run. The first five km were great. The adrenaline was working as it should and I was elated. Right after 2 km I had to refill a lot of water and put ice behind my bra to cool down. The second section was a bit worse. My legs and pain from my period were starting to make their presence known. But I tried to diffuse it by looking around and rating hotels. Like where I'd like to stay, where I'm sure it wouldn't be worth it... that helped for quite a while. The third section was pretty critical, but I tried to get into my head that it was great that I was past the halfway point and that it was less than a lap to the finish line. I refilled water almost every km and put ice everywhere where I was sure it would stay for a while and cool me down. The last stretch was the most painful, but I had only one thought in my head, and that was to enjoy the finish line and the incredible race atmosphere. About half a kilometer before the finish Míra was running opposite me and he pushed me with words to the finish line. I didn't beat my dream time. I ran it again in 2:11. I was disappointed, but glad to be done. By the time I crossed the finish line, I was completely KO and unable to enjoy the completion of the race just yet, and floating in seventh heaven was out of the question. But it was clear to me that the moment would surely come. My stomach and legs were on fire, I would have loved to separate them from my body and borrow those body parts from someone else. As for the cup, though, I didn't feel that at all, but as I wrote, I was glad I'd brought the menstrual panties as well. After all, the movement was pretty intense and so the leaks around the cup were there for that time. And so far I'm definitely not in the group of girls and women who let the blood flow freely and don't worry about anything. I am very thankful for the times we live in and that we have so many menstrual aids to choose from. 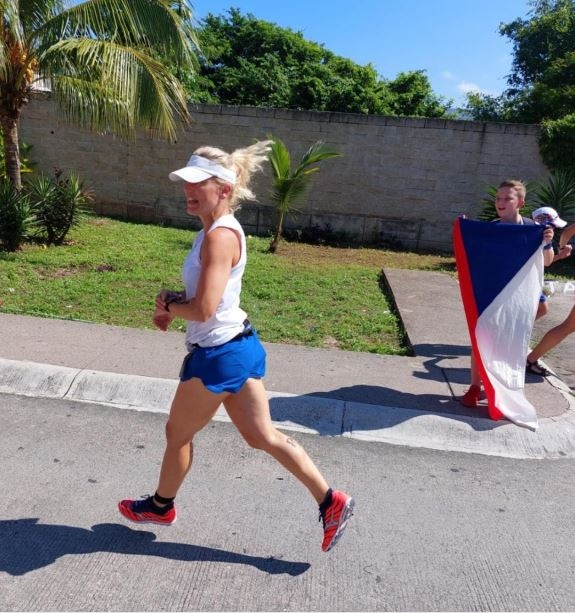 I know that the time during menstruation is better to rather give the body time off and rest. But when you can't plan anything else, you have to take into account that it will take your body longer to recover from the strain than if you were to run it on a normal day. That's probably the biggest pitfall. Because everything else you can enjoy without limitations, as it should be - the adrenaline flowing in your body, the race atmosphere and the whole event, and when you do a race in a team, the experience is even greater because you have someone to share it with and enjoy the result.

As a Czech-Mex YUUKI CUP team, we placed an incredible seventh in our category out of 60 relays. And 273rd overall out of 1,853 participants. Our time was almost the same as 6 years ago. Now, it was that time when I was floating in the seventh heaven and enjoying everything 150%.

I hope I have helped a little with questions about whether the cup is suitable for sports or some activity. The cup is definitely not the limiting factor for doing things during our periods. It's a tool to help you feel at ease and without the worry of leaking.